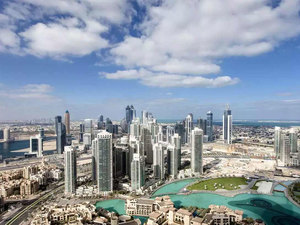 Dubai house prices will rise for the first time in six years this year, supported by a swift vaccine rollout that has lifted hopes for an overall economic recovery, according to a Reuters poll of property analysts.

The city state's real estate sector has been weak for years due to chronic oversupply coupled with low economic growth, a problem exacerbated by the coronavirus crisis.

But on Monday the second-wealthiest emirate in the UAE eased COVID-19 restrictions and allowed hotels in the hub to operate at full capacity, raising hopes for a region heavily dependent on tourism.Seven of 10 real estate analysts who responded to an additional question said an acceleration in Dubai housing market activity this year was more likely. The remaining three forecast a slowdown."We can already see improved investor confidence and a boost in demand as prices have be ..
"The vaccination drive here also has been going well, and the economy has been gradually recovering amid government measures to spur growth."
The May 11-19 Reuters poll of 10 analysts forecast Dubai house prices would rise 1.1% this year and 2.8% next, marking a complete U-turn in expectations from a January survey when prices were forecast to decline 2.0% in both years.Eight of 10 property analysts said the risks to those forecasts were skewed more to the upside.Prime Dubai properties have been snapped up in the past few months as buyers take advantage of low prices, e ..
Still, eight of 10 analysts who responded to another question said a sharp turn in the economy or an increase in demand were the biggest upside risks to housing market activity this year.
Dubai's economy was projected to grow 4.0% this year after an estimated 6.2% contraction last year, according to Dubai Statistics Centre data.
Contributing about 8% to economic output, the real estate sector has shown an uptick recently, data from Dubai Land Department showed.
"The real estate market has been very buoyant since H2 2020 and continues to flourish. As more government incentives come into fruition to stimulate the economy, this will have an effect on the housing market," said Lynnette Abad Sacchetto, director of Research & Data at Property Finder.When asked what was the biggest downside risk to housing market activity this year, five of 10 analysts said an economic slowdown. The others said lack of demand or a lack of affordable homes.
"The only potential risk I see at the current period is that COVID-19 lingers longer than expected and further affects economic growth and tourism to the emirates," said Simon Baker of Haus and Haus.